Article 102 of the Charter of the United Nations calls for the registration and publication of all international agreements as soon as possible after that Agreement is entered into.

- The United Nations Treaty Series Database - containing over 200,000 records of treaties and related subsequent actions from 1946- in their authentic language(s), along with translations into English and French, as appropriate. 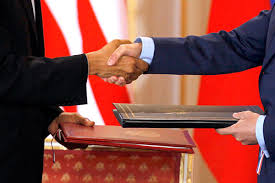 Bilateral treaties create limited obligations or laws for the two states that consent to them - these may not create one single general rule of international law although they may be based upon more general rules.

Multilateral conventions between multiple countries are explicitly intended to codify customary practice, create new rules or establish international agencies (such as the International Criminal Court, for example). The lawmaking treaty (eg. the Vienna Convention on the Law of Treaties of 1969) is designed to create rules that have universal or general relevance.

Ratification by states indicates consent to the rule by those states - if the initial number of ratifying states is small the treaty may not have application outside of a local or regional context and may therefore not establish a new rule of general international law. States that specifically choose to not ratify a convention are not normally bound by the rule.

Treaty Collections - By Region or Country

The United Nations Treaty Handbook provides procedural guidance (including a handy glossary of terms) to states wishing to participate in international agreements. It was last updated by the Treaty Section of the UN Office of Legal Affairs in 2012.

Other useful treaty related books located in the University Library include: