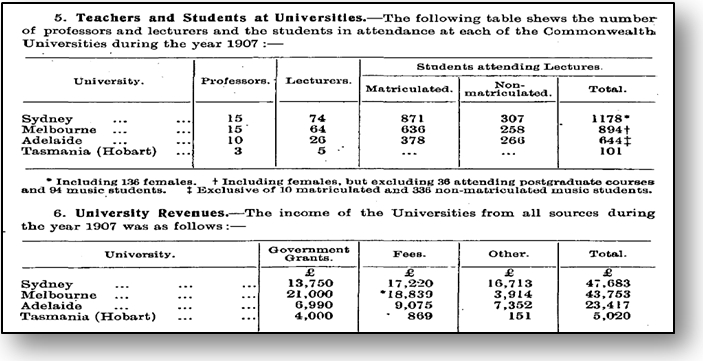 Australian Bureau of Statistics Year books:-  The Yearbooks provide comprehensive statistical overviews of social and economic conditions within Australia for a given year. Statistical Information is available for many aspects of Australian life from geography and demography to government, politics and international relations, the environment, labour force data, housing and health and  other data categories.

Year books also contains feature articles summarising the statistical history or background of an important issue. Recently these essays have reflected the theme for a specific year. The 2008 year book contains sections on geohazards, water and drought in recognition of The International Year of the Planet Earth. Past years have included articles on many topics; Australia's Involvement and Activities In The United Nations, 1945-95 (1995), The 1967 Referendum (2004), Blue - Green Algae (1992) The Australian Flag (1983) and in 1974 A History of Roads in Australia. Feature articles were regularly included in yearbooks from the 1970s onward. Coverage for state Year books vary, most are available from 1996-2008.

Australian Year book online 1907-2008
The Year book of Australia is available online for the years 2007-2008. It is useful for researchers who require key data on a specific topic or who wish to compare social and economic trends across a number of years. Access: ABS Year book Products

Historical School Data Online:-  statistics on school, students and teaching staff involved in the provision or administration of primary and secondary education, in government and non-government schools for all Australian states and territories. Data is available for 1960 onward
Access: Schools, Australia

Subject searching in the Library catalogue

Official Yearbook of the Commonwealth of Australia. Melbourne No. 1, 1908 Introduction pp.1-16  includes a summary of the origin of state statistics in Australia [ Access via the Australian Bureau of Statistics website]